Now that the trial of Kyle Rittenhouse is over and the dust is starting to settle, the teenager who became a target for the Democrats and their followers understandably wants to move forward with his life. Hoping to escape the constant media attacks, Rittenhouse recently appeared in an interview with Tucker Carlson.

Tired of the ads? Go Ad-Free and Get EXCLUSIVE Content From Stew Peters and the RVM Team, Become a PREMIUM USER [1]

Not looking to be the next figure for either party, Rittenhouse was sure to admit that he was a supporter of the Black Lives Matter movement. But even though the teenager might support American’s right to free speech, BLM and many liberals can’t look past the fact that he used deadly force to defend himself. And although a jury of his peers found him not guilty, to the left, he is just the latest person to profit off of “white supremacy.”

Hoping to continue his life, Rittenhouse revealed that he was planning to attend Arizona State University. While already attending the university online for a certificate in nursing, a pro-immigration group has started to call for protests against the university if they allow Rittenhouse on campus.

MEChA de ASU (Movimiento Estudiantil Chicanx de Aztlán), which is known for supporting the amnesty program and illegal immigration, can’t seem to come to terms with the idea that Rittenhouse was found not guilty when he shot three men who attempted to harm him. Acting in self-defense, as was shown during the trial, Rittenhouse ultimately discharged his weapon, killing two and wounding another.

Still, the group is not only voicing their disdain for Rittenhouse being allowed on campus, they even posted a picture on their Instagram page that falsely accused the teenager of being a murderer. 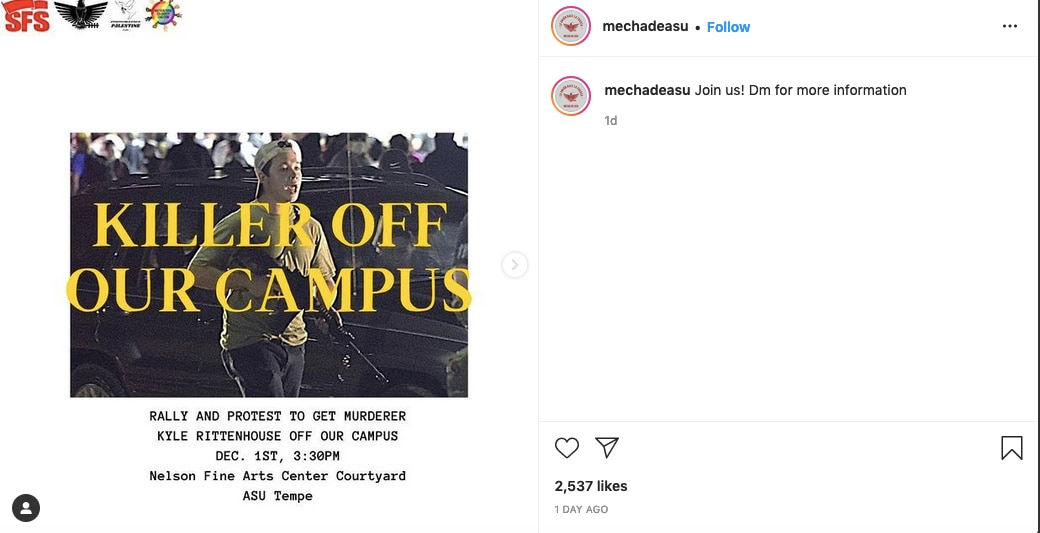 On top of labeling Rittenhouse a “bloodthirsty murderer,” the group also had a list of demands (like all liberal movements). They insist that the ASU Police Department be defunded due to supporting “white supremacy.” The group believes a new multicultural center on campus will somehow offset the absence of law enforcement. 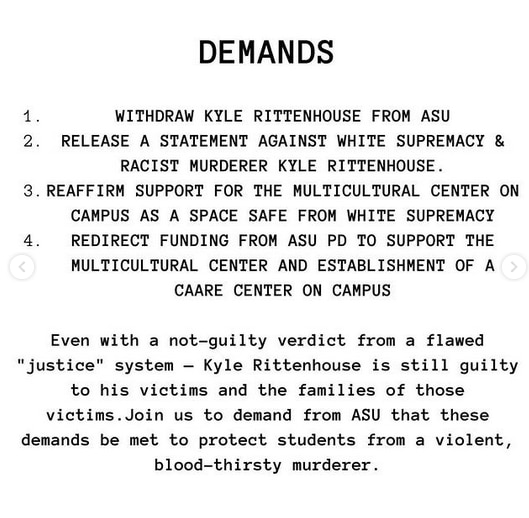 Joining [3] MEChA in their calls to demand Rittenhouse not be allowed to attend the school are Students for Socialism, Students for Justice in Palestine and the Multicultural Solidarity Coalition.

Professor Jonathan Turley, a legal scholar, has publicly stated that he hopes ASU will act with “integrity and courage” to allow Rittenhouse the right to attend classes at the university. “[Rittenhouse] has every right to expect that he can do so safely,” Turley said. “Students have every right to protest, but ASU must be clear and public in supporting Rittenhouse’s right to access to an education on its campuses.”

It should be noted that while MECha de ASU is taking a stand against Rittenhouse, the group had to disable the comment section on their Instagram post as many users pointed out how they were slandering an innocent man.

Thanks to the constant attacks by the liberal media, will Rittenhouse ever really be free?

This piece was written by Jeremy Porter on November 29, 2021. It originally appeared in RedVoiceMedia.com [5] and is used by permission.