Service academy superintendents have denied using Critical Race Theory (CRT) to indoctrinate what are supposed to be America’s highest quality military officers. New evidence , however, exposes USAFA as playing loose with the truth, as revealed by courageous cadets every week now. 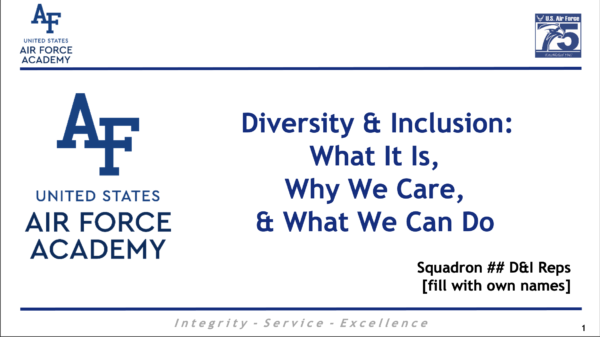 Particularly concerning is this excerpt from Slide 16:  “Not “Colorblind” or “I don’t see color” or “we’re all just people””

Proponents of CRT erroneously claim “colorblindness” to be a white supremacist tool designed to oppress people of color and to preserve “white privilege.”  Elimination of colorblindness as an American cultural norm is a centerpiece of the CRT agenda.

The underlying principle of the Equal Protection Clause of the 14th Amendment (and of Title VI of the Civil Rights Act of 1964) is to require that all Americans be legally “colorblind,” i.e., treated by all governments equally, regardless of race.

For our military, colorblindness is also a subset of an essential cultural value – selflessness.  Subordination of self (including of subgroup identities) requires constant, unqualified commitment to the mission and to teammates over oneself and anyone else’s personal considerations (including race, ethnicity, and heritage).  Teammates on the battlefield must be oblivious to such differences.  Mutual trust among teammates, whereby all have complete, unqualified commitment to each other (and complete trust that the commitment is reciprocal), regardless of such personal characteristics, is essential to unit cohesion and combat effectiveness.

Preserving the Warrior Ethos.  H. R. McMaster.  National Review.  October 28, 2021. “The U.S. military must continue to evolve toward an institution in which all Americans, regardless of the color of their skin, can fully belong and enjoy equal treatment, because nothing is more destructive to teams than racism or any form of prejudice. But civilian and military leaders must not allow reified postmodernist theories to erode the sacred trust between warriors or diminish the meritocracy and objective realities that are essential to preserving the warrior ethos as the foundation of combat effectiveness. (emphasis added)  Warriors should be judged by their integrity, trustworthiness, physical toughness, mental resilience, courage, selflessness, and humaneness.”

Focus on race (rather than requiring colorblindness) in officer accessions, assignments and promotions is not only unconstitutional/unlawful, it is antithetical to that cultural necessity.  It also builds distrust and resentment.  When used as a factor in officer accessions, assignments or promotions (as is now happening, in clear violation of Section 601 of the Civil Rights Act of 1964), it also dilutes meritocracy, unarguably reducing leadership quality and, secondarily, creating resentment and further division.

Focus on differences (of race, for example) inherently involves focus on self (not selflessness) and is thus dis-unifying.  A good example of how that focus (on race) degrades our military culture is evident in this ARMY Magazine article, written by a Black lieutenant colonel who measures success in terms of the number of Black females who are selected for higher grade.

In Commit “Intentional Acts of Inclusion” to Combat Racism, Army Magazine, May 19, 2021, the author argues for change in military culture, effectively diluting meritocracy with “intentional acts of inclusion” in order to increase Black female representation in Military Intelligence (MI) senior officer billets.  As a Black female, newly promoted LTC, she sees her future through the lens of attainment of higher rank by Black female MI officers.  Her mindset is the antithesis of a “colorblind culture” of selfless service.  She admits having not experienced any event of overt racism, yet claims the Army is systemically racist, as proven by “underrepresentation,” which she wrongly equates to “exclusion,” of black females in MI ranking roles. Dismissing whether “underrepresentation” might be due to factors other than presumed racial bias (such as objective evaluation of demonstrated performance and promotion potential), her article is filled with baseless assumptions, non sequiturs, and proposals that are nothing more than race-based affirmative action couched in DEI terminology.  That she was promoted to O-5 should concern anyone who understands the importance of a colorblind, meritocratic culture in which Soldiers are judged by their performance, not at all by their skin color or gender.

This article demonstrates the degradation DEI has been causing to the culture of selfless service – what used to be the required subordination of self, including of sub-group identity, and commitment to mission and teammates – and to the dilution of meritocracy. Racial and gender preferences are diminishing leadership quality and therefore, combat effectiveness.  If her views of those fundamental tenets represent those of Army leaders, we should expect to have an inferior military readiness posture (with inferior leadership) and, consequently, elevated risk of being drawn into armed, potentially catastrophic, conflict because of that all-too-evident weakness.

This unlawful and brazen movement within DoD advancing CRT tenets threatens our national security and must be stopped.

VFM’s president wrote a subsequent email to General Bishop discussing the use of racial and gender preferences for cadet rank and position selection:

You raised the subject of the use of race (and gender) in cadet rank/position selection at USAFA. An Army officer (US Military Academy at West Point grad) who was a former company tactical officer at USMA in the 1990s confirmed that when he was a tac, race and gender quotas were explicitly used in the cadet rank and position nomination/selection process. I would be surprised if USAFA has not been doing the same thing.
Such discriminatory practices are nothing new, and they teach negative cultural lessons to cadets.
As a cadet communication to you shows, their widespread use also disincentivizes excellence/breeds mediocrity in the form of “why should I bother [to work as hard as I can and go the extra mile to do my best when I will be judged not solely on the basis of my performance but instead on the basis my skin color and gender]”?  USAFA (and USMA) should not be using practices the natural consequences of which diminish the ethical imperative of relentless pursuit of excellence – always pushing oneself to do one’s best, even on a bad day.
Similarly, such preferences breed lack of respect for the chain of command, both directly and indirectly. Most in the chain of command disingenuously either deny that they use preferences or they conceal it, or (if they admit it) claim that their use is fair and does not diminish meritocracy (as did the Chief of Naval Personnel, discussed here).  Cadets are too smart to be fooled, and officials’ conduct that predictably instills distrust in the officer chain of command is an irresponsible dereliction.  It is sad to know that such distrust is being inculcated in cadets, and it surely is disillusioning to high performers who came to USAFA with higher expectations, only to learn that their officer chain of command is untrustworthy.  How well do military units perform when they deem their superiors untrustworthy?
It is our moral obligation to provide our future warriors with the “best-qualified” leaders we can find. “Qualified” isn’t good enough on the battlefield, especially when the “qualified” bar is subject to adjustment to meet demographic composition goals.  As you know, combat is a form of meritocracy that knows no color or gender and where, other things being equal, the best led force will likely defeat – kill – those who are less well led.  The mission and lives are at stake. Our soldiers, sailors, airmen, marines who are putting their lives on the line deserve only the “best-qualified” leaders.  We should be doing that 100% of the time, never compromising leader quality to fulfill ideology-based, social justice agendas.
In the USAFA DEI slide deck, you will nowhere find the words “merit,” “meritocracy,” “best,” “best qualified,” “selfless,” “selflessness,” “Equal Protection of the Law,” or “Constitution.”  The reason is those concepts are antithetical to DEI where DEI is disassociated with the concept of merit and goes beyond just diversity of thought and instead wanders into racial diversity.
A few slides demonstrate specifically how those concepts are diminished.
Slide 9 expressly defines Diversity to include diversity of race.  Nowhere is it explained how diversity of race reliably translates to diversity of thought and, more importantly in the Air Force, to improved performance/combat effectiveness.
Slide 11 only vaguely defines “Inclusion,” a purposeful obfuscation since apparently “participative leadership” at USAFA includes, in cadet rank/position selection, discrimination on the basis of race and gender.  We know “inclusion” in the USAF means using race and gender discrimination in such things as pilot training selection, diluting meritocracy (and, at least in the case of race, likely violating the law).
Also, and tellingly, nowhere in the slides is there any caution that “Inclusion” should never be construed to mean that it would be acceptable to consider someone’s race or gender in assignment or promotion selection. (A potential exception might be in certain land-based operations where the tactical environment might require a race or gender assignment consideration but that does not apply in the cockpit.) The omission of such a warning speaks loudly.
Slide 16 (fifth bullet point), by disapproving of the word “colorblind,” teaches that “Inclusion” as implemented by the USAF includes focus on self and racial subgroup identity. That focus is antithetical to the selfless servant (total subordination of self and subgroup identity), colorblind warrior ethos (and unqualified, reciprocal commitment among teammates regardless of skin color) discussed at length in my earlier email.
Slides 7 and 17 claim that the principles taught in the presentation make one an “inclusive leader of character.”  Some of the concepts (e.g., exercise of dignity and respect; self-reflection) no doubt are traits of a good leader, and it is good that they are being taught.  One is problematic, however. The claim in slide 8 that a racially “diverse and inclusive force is a war-fighting imperative” merely echoes an unproven claim of DoD DEI ideology contrived long ago to facilitate a legal argument. That disingenuous legal argument – that using racial preferences is essential to national security and therefore lawful/Constitutional – is both false and offensive to the principle of meritocracy, to fundamental fairness, and to Equal Protection of the Law as mandated by the 14th Amendment to the Constitution (and Title VI of the Civil Rights Act).
It is therefore false and misleading to characterize adoption of such teachings as being consistent with good character.  Leaders of character follow the law and don’t obfuscate or prevaricate in an effort to justify their actions.
Finally, it is worth remembering that the military officer’s oath includes the words “that I will bear true faith and allegiance to the same,” referring to the Constitution. It is impossible to reconcile adherence to that oath with promoting the use of race in military officer accession, assignment or promotion programs.

We veterans take no pleasure in putting these negative messages out to the public about our beloved services and the institutions that support them; but, we must keep our oath to the Constitution. On this day, the U.S. Air Force birthday, we can only wish it future success in a return to. a full meritocracy and away from these readiness – destroying indoctrination policies.

Biden Allows Chevron to Drill in Venezuela, Not America

No Data, No Studies: Fauci’s Rationale for Lockdowns Based on ONE Guy’s Report from China