LOS ANGELES, CA – A 29-year-old Antifa militant who describes himself as  “a documentarian and independent journalist” is apparently calling for lethal violence to be enacted against Republicans. The unstable Antifa militant is also unhealthily obsessed with the woman behind the Libs of TikTok account on Twitter, posting about how the woman should “live in fear” in perpetuity.

In the wake of the mass shooting at a Colorado LGBT nightclub [1] that claimed the lives of five people and left over two dozen others injured, the incident has seemingly served as a springboard among radical leftists to vilify, particularly, White men and also promote violence against Republicans in general.

The problem is radicalized, brainwashed, white men.
White men.
Old ones,
young ones, damaged ones.

It likely goes without saying that a cursory review of FBI crime statistics [3] broken down by the race – especially in the realm of homicide – debunks the notion asserted by Jaeger that there’s only a “problem” with White men.

But the racist rhetoric being flung by characters like Jaeger is almost negligible when compared to the calls for real-world violence by individuals, which 29-year-old Vishal Pratap Singh is using his social media platforms to do exactly that.

The Post Millennial editor-at-large, Andy Ngo, took to Twitter on the evening of November 20th to provide a litany of examples where Singh was calling for a “war” against his perceived enemies – namely, Republicans and anyone else Singh believes is anti-LGBT.

Vishal Singh, an #Antifa [4] far-left violent extremist in Los Angeles who identifies as a journalist, is calling for deadly violence again. He has declared war on Republicans & repeatedly threatens @libsoftiktok [5]. Singh was invited by @aaja [6] to speak at their conference this year. pic.twitter.com/HGYkcncZ02 [7]

One of Singh’s posts showcased by Ngo was shared to Twitter by the unhinged individual on the morning of November 20th, where Singh began labeling those not in lockstep with the LGBT ideology as enemies who should be physically attacked.

“I’ve had it. I’ve fucking had it. The anti-LGBTQ+ hate in this country has gone too far. Liberals who appease transphobes have gone too far. That’s it. We’re done. We’re fighting back. It will be militant. You will not genocide us into the night. You want a war? You’ve got it.”

“Any cis or straight person who remains silent in the time of anti-LGBTQ+ genocide and pogroms in the United States is no ally. They are the enemy and should be treated as such. This is a war for survival and I’ll be damned if LGBTQ+ lives will be stolen without a fight.”

Any cis or straight person who remains silent in the time of anti-LGBTQ+ genocide and pogroms in the United States is no ally. They are the enemy and should be treated as such. This is a war for survival and I'll be damned if LGBTQ+ lives will be stolen without a fight.

In what appears to be a since-deleted post to Instagram, Singh was far more explicit in his calls for lethal violence, declaring a “war” against Republicans.

“You Republican fuckers want a war? You fucking got one. LGBTQ+ people will not go quietly into the night. Your genocide will be resisted with a militant response. Fuck this. It’s over. We’re at war. I’ve had enough. I warn cisgender and straight people about the incoming genocide daily and none of y’all fucking listen. Whatever. You’re no ally if you’re silent right now. This is wartime. We will not surrender.” 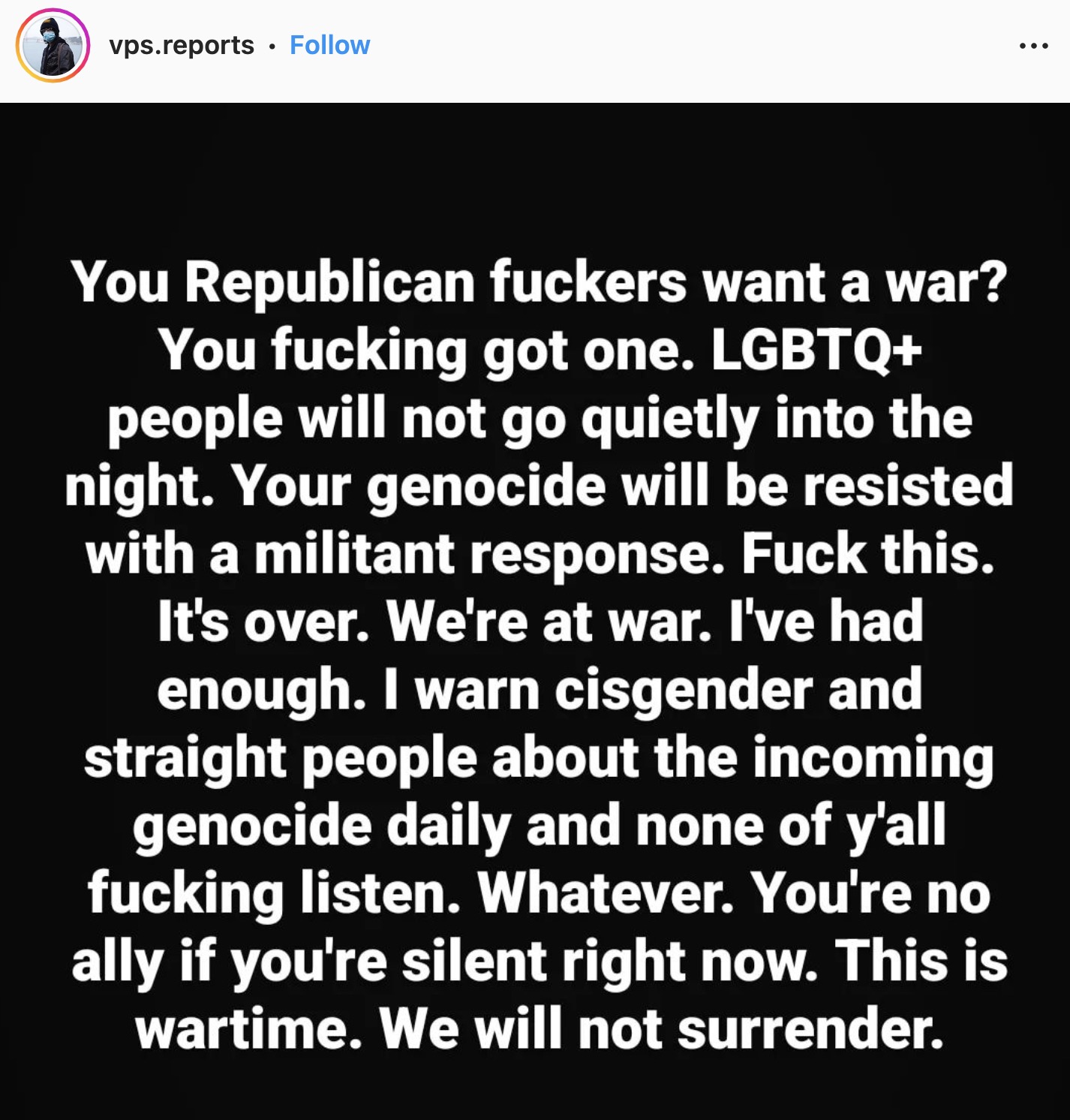 Singh has clearly become seduced with the notion that there is some kind of an active “genocide” against the LGBT community here in the United States, which is essentially nothing more than a conspiracy theory that has zero evidence backing the absurd belief.

It should also come to no one’s surprise that Singh also wishes to impart violence against anyone sporting a MAGA hat, having written on his personal Instagram account earlier in November that, “The MAGA hat is a sign of a terrorist. Treat these fuckers accordingly.”

Falling in line with much of the other vicious rhetoric espoused by Singh, he also holds a seemingly insatiable violent obsession with Chaya Raichik, the woman behind the immensely popular Twitter account Libs of TikTok. Having held a grudge against Raichik for months prior to the Colorado incident, Singh has since dialed up the unnerving rhetoric aimed at Raichik to threats asserting that she’ll be living “in fear for the rest of [her] wretched days.”

Shut the fuck up you terrorist Nazi fucker. You will live in fear for the rest of your wretched days.

Singh apparently believes that Raichik is someone harboring “transphobia,” which he uses as a means to justify his calls for violence against the woman. However, Singh appears to assign the label of “transphobia” to anyone remotely critical of the radical trans agenda aimed at youths in the United States – a tactic employed by radical trans activists in an attempt to absolve them from valid criticism.

One last thing: @ChayaRaichik10 [11] should live in fear for the rest of her days. It's only fair. Put the PHOBIA in her transphobia.

With Singh frequently calling for terroristic-levels of violence, it’s hardly shocking to see he has written for pro-Antifa outlets [13] like Daily Kos and It’s Going Down News, which the latter of the two is a media collective that was the subject of congressional hearings over the extremism promoted [14] by It’s Going Down and was banned by Facebook in August of 2020 for falling under the list of “dangerous individuals and organizations [15]” due to the media collective being a front for an “armed militia group [16].”

Thus, Singh openly reposting content on Twitter that calls to mobilize a militia-style of violence should come with little shock as well, as he reposted on November 21st a tweet from Arm Your Friends that read, “Stop debating people who are arguing in bad faith. Load up on ammo, assemble your crew, get some practice in, learn to Stop The Bleed, and harden your community.”

Violent acts or calls for violence coming from the radical left isn’t exactly something new, especially when viewed from the lens of over the past seven or so years, but vocalized extremism is still something that shouldn’t be brushed off when bearing in mind the escalation from the radical left over the aforementioned timespan. Individuals such as Singh need to be taken seriously when espousing call for violence, especially when taking into consideration the circles he runs with.

This piece was written by Gregory Hoyt on November 21, 2022. It originally appeared in RedVoiceMedia.com [17] and is used by permission.

Read more at RedVoiceMedia.com:
Died Suddenly Documentary Sneak Peek [VIDEO] [18]
College of Physicians and Surgeons of Ontario Suggests Drugging the Unvaccinated into Compliance [19]
The Band-Aid Has Been Ripped off the Vaccine Agenda: 30% of Parents Now Question the Entire Schedule [20]