Opinion: We must open America back up for business and each of us has a civic responsibility to act NOW

Louisiana State Representative Mark Wright suddenly changed his mind and is calling for an end to statewide pandemic orders by May 1 - Why?

My good friend and neighbor, Mike Church, wrote a letter to Louisiana District 77 State Representative Mark Wright on April 9. Mark is our State Representative and Mike asked him to initiate specific actions against Governor John Bel Edwards to call for the end of the current statewide pandemic orders totally closing the economy, restricting free association, and freedom to worship. His letter and blog post, reprinted below with Mr. Church’s permission, respectfully implored Wright to act by calling for a special session, a legislative power under the state’s constitution, to address the Governor’s continued orders during this pandemic.

Mr. Wright responded to the email by phone to Mr. Church, but Church was unable to take his call. Mr. Wright responded from his official, public record email address, included in the April 10 update below. Wright’s email is clear, he was supportive of the decisions being made by the “appropriate federal and state authorities” and did not entertain his constituent’s request in any way.

When Mr. Church finally did get to return Wright’s call and speak with him on Good Friday, it didn’t seem to go well as you can see in Mike’s Update 2 below. Unfortunately let’s just say Mr. Wright’s response to his constituent’s letter and follow-on communication was less than collegial or even respectful for that matter, considering Wright works for us, the people, and considering we’ve seen ferocious responses in the media and by political partisans when others have even mildly addressed a constituent in such ways. You can listen to Mr. Church’s response on his Crusade Channel show this past Monday morning here.

But here is the good news, Mr. Wright has gotten on board with folks like new Louisiana representatives Danny McCormick and Richard Nelson, with ending Governor Edwards statewide restrictions on May 1 as of the evening of April 13 as published here. There is a distinct lack of recommendations about how we should reopen in this reporting however. A lot of us with experience in pandemic responses have been making recommendations for quite some time so maybe the Governor and these legislators will use the ideas. After all, we can’t just throw Grandma and Grandpa out in the open and hope they survive. You can read more about planning and taking steps to appropriately protect ourselves when opening up in my March 26 piece. Of course, the situation is very fluid so we need to add measures to protect the high risk portions of the population such as continued flexible isolation for Grandma and Grandpa, social distancing measures that work, and most importantly finish getting mass testing up to speed, including antibody testing.

So what happened? I had Mike on as my guest on The Rob Maness Show this week and here is his story in his own words:

Mike Church is reteaching us all a lesson that we should always keep at the top of mind: we citizens have a civic responsibility take action and get in touch with all of our elected representatives, especially at the state and local level, or this economic destruction of our state and attack on liberty will continue. All of us should use Mr. Church’s action as a model to send our representatives this message because we citizens doing our civic duty helps elected officials do what they know is right.

I applaud Mr. Wright for responding to Mr. Church quickly but another lesson that struck me as I listened to this story many times since Easter Sunday is this: respect goes both ways, especially if you’re an elected official or in an appointed position of public power. We all know that and once Mr. Wright is not so stressed out like the rest of our state and country, maybe he will see that too and apologize to his constituent, Mr. Mike Church.

Reprinted with permission from The Mike Church Show:

Ladies and gentleman, it seems that only The Federalists’s Joy Pullman and I are alarmed by our governor’s autocratic tyrannies and will write-broadcast about it. Below find my letter to Louisiana District 77 State Representative Mark Wright. Mark is my State Representative and I asked him to initiate specific actions against Governor John Bel Edwards. Joy, I implore you and every other citizen alarmed by what can only be described as a controlled demolition of our economy and communities by extension, to write and demand of your LOCAL and STATE representatives similar actions. This is our last chance to peacefully stop this obvious coup.

I write to you today as a gravely concerned citizen, father of 3 and small business owner that resides in your district. Governor John Bel Edwards has used Louisiana Homeland Security and Emergency Assistance and Disaster Act. La. R.S. 29:72 1 as the basis for his act. No one reading this act could come away with the clear understanding that when the legislature passed this act it was intended to grant their powers to the Executive for such an extended period of time.
I am a columnist for The Daily Caller website, owner of the internationally listened to CRUSADE Channel and 28 year long host of The Mike Church Show; 22 of those years have been broadcast in or from Louisiana. I love and care for my community, parish and state. What the governor is doing is based on horrible “models”, junk science, cooked books and fear. He does not have the authority to continue his tyranny ad nauseum, the Louisiana Constitution says so and so does the Federal. My Daily Caller article on the matter that explains the Constitutional reasoning, is attached in its unedited, long-form, you can read it here:
https://dailycaller.com/2020/04/08/church-why-a-governors-fiat-is-not-a-constitutional-republican-form-of-government
As your constituent and on behalf of the hundreds upon thousands of people I know directly and indirectly, whose service industry livelihoods, life dreams and savings, have been destroyed by the Governor’s fiat, I ask you to invoke Article I, Subsection 3, Item B
B) Extraordinary Session. The legislature may be convened at other times by the governor and shall be convened by the presiding officers of both houses upon written petition of a majority of the elected members of each house. The form of the petition shall be provided by law. At least seven calendar days prior to convening the legislature in extraordinary session, the governor or the presiding officers, as the case may be, shall issue a proclamation stating the objects of the extraordinary session, the date on which it shall convene, and the number of days for which it is convened. The power to legislate shall be limited, under penalty of nullity, to the objects specifically enumerated in the proclamation. The session shall be limited to the number of days stated therein, which shall not exceed thirty calendar days.
The purpose of this session is for the republican legislature to consider the extended “lockdown” of nearly all commerce and
a. free association
b. freedom to worship
and to positively sign YOUR names to this ongoing autocracy in the affirmative or negative. John Bel Edwards is not the only politician in Louisiana who swore an oath to the Louisiana and U.S. Constitutions. This is your job as my elected representative. Under both Constitutions I am guaranteed (see attached) a “republican form of government”; living under the autocratic rule is not republican and it has gone on long enough.
The National Restaurant Association, in December 2019, said Louisiana has over 213,000 people employed in the restaurant industry; they are nearly all now decimated if not wiped out by this irrational, ill conceived, un-scientific “lock-down”. Please, consider the common sense arguments of thousands of voices now rising against this tyranny, across the state and the continent and act. Your action can force John Bel Edwards to reconsider his tyranny and if he won’t then the Legislature must make him do it; lives and livelihoods of the living and productive are at stake.
I plan to use every media outlet and source I can to broadcast and promote this demand and encourage your constituents (and the rest of the state) to sign the online petition, demanding this tyranny end and common sense prevail before a bad flu season permanently ruins the good people of this state’s livelihood and well being.
You may contact me directly at 985-XXX-XXXX.
May God bless and Mary keep you,
Our Lady of Prompt Succor, Patroness of Louisiana “Hasten to help us!”
Fred Mike Church
XXX Hxxxxx Xxx Xx.
Madisonville, LA 70447
LA 77 District

UPDATE: 4/10/20 Representative Mark Wright has responded and basically said “Citizen, you will OBEY your Federal and State overlords and stop publicly complaining, citizen!” Here’s the response: 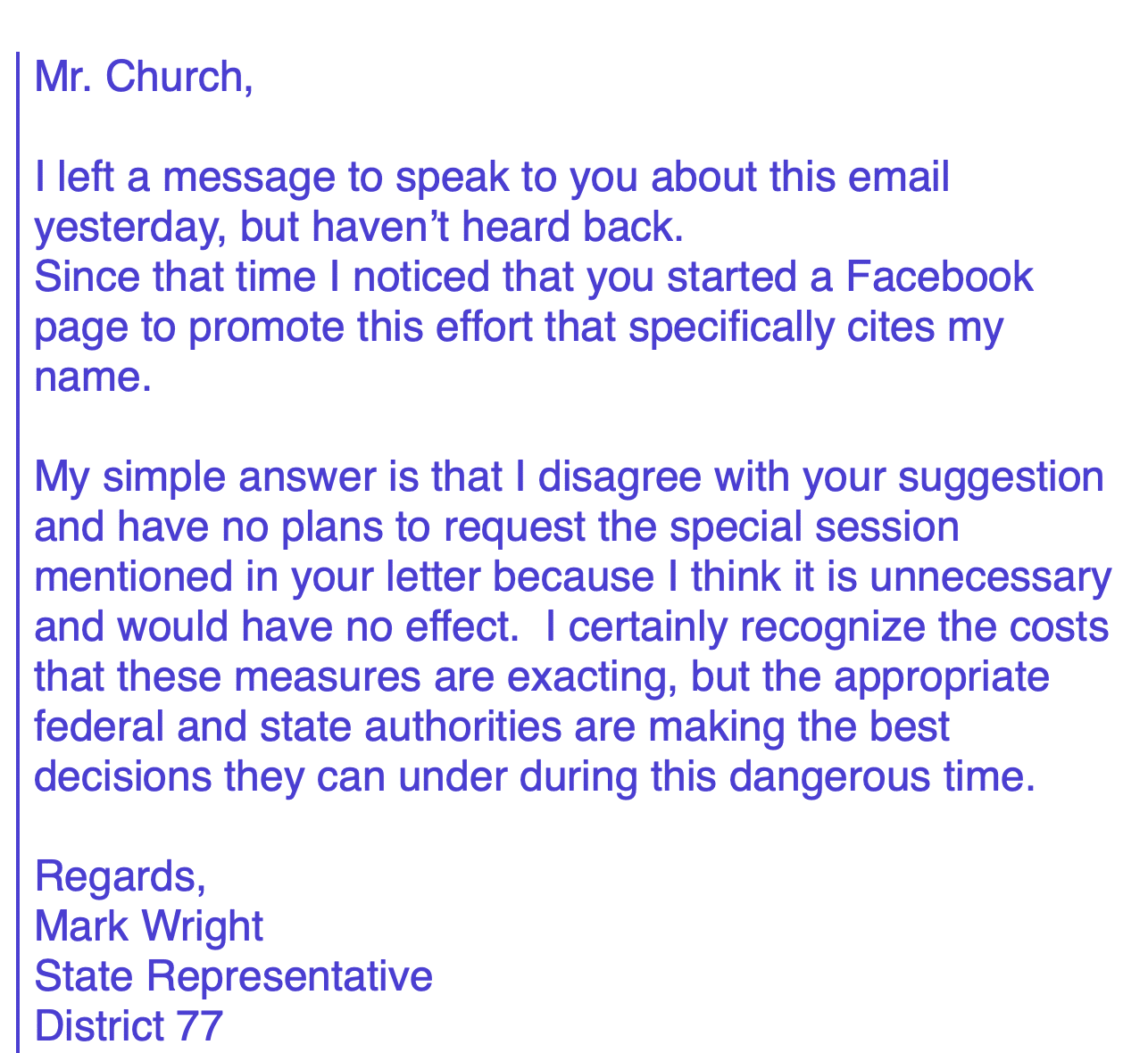 UPDATE 2: I have spoken with Representative Wright by phone, or more accurately, I was spoken AT by Rep. Wright, paraphrasing, he made two points.

I will respond to these claims on Monday’s Mike Church Show but I believe the body of work, hundreds of extra hours researching the Covid-19 subject and reporting actual data, vindicate my motives and intentions and am perfectly comfortable letting readers and listeners make that judgement. A blessed Good Friday!

UPDATE 3: Since Representative Wright seems to have found this page, I pray he and others will consider the actual FACTS of driving this autocratic tyranny. This is from Swiss Propaganda Research Doctor, please follow each link and verify for yourself, as I have done. You’ll need to install google translate because many of the research papers are written in Italian and German. 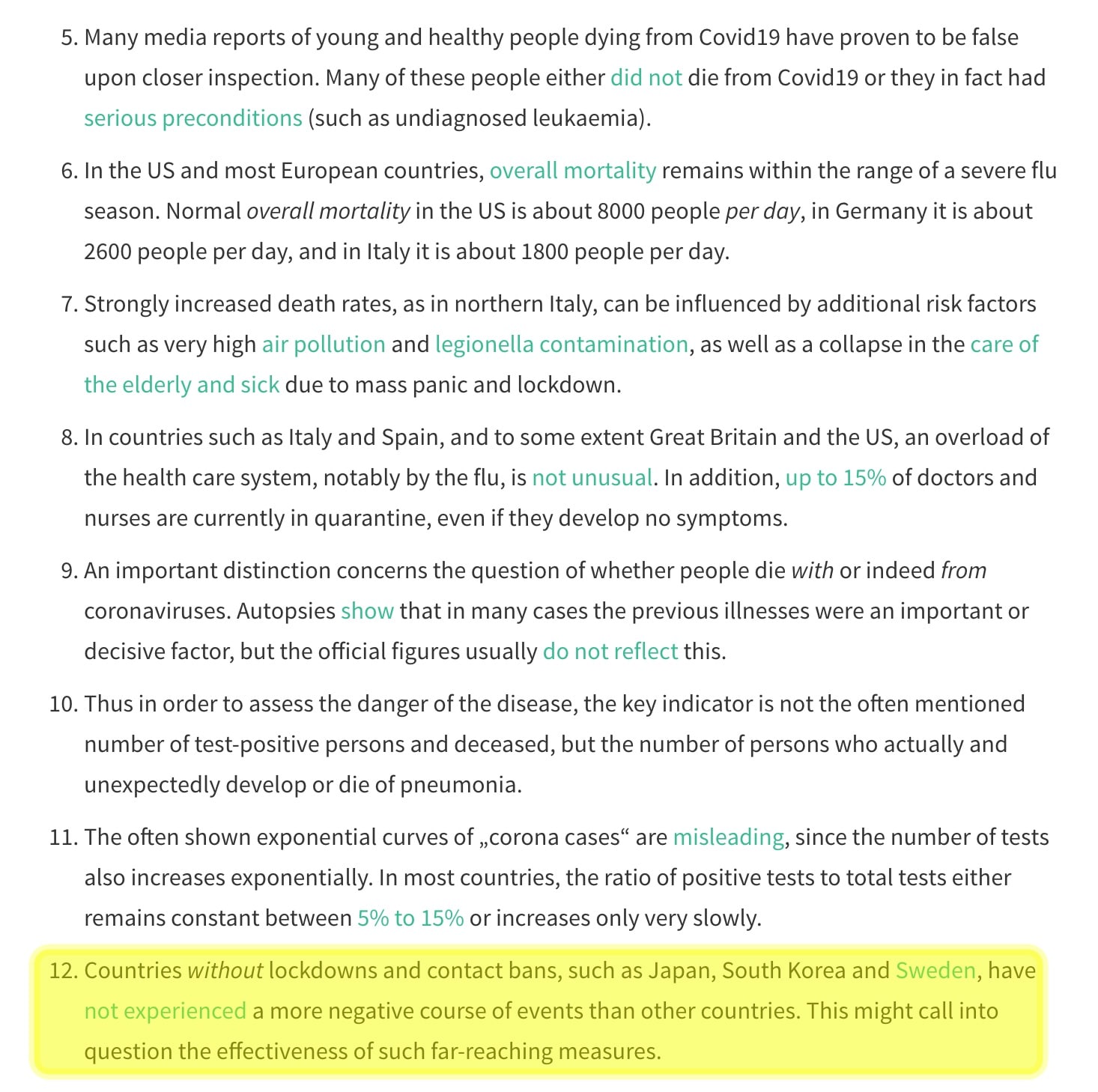