He allegedly used their residency status to target them.

Denver, CO – Tay Anderson, an outspoken Black Lives Matter activist and Joe Biden supporter, has been accused of molesting over 60 undocumented students (Dreamers) as young as 14 years old. He allegedly used their residency status to target them.

MORE NEWS: [VIDEO] The “Rage” is Back: Biden Absolutely Loses it On CNN Female Reporter…

“Denver School Board member Tay Anderson says that he is stepping away from the board while the district finishes it’s investigation into allegations of sexual misconduct. Anderson says he’s never sexually assaulted anyone. He says he’s stepping back to protect his family and avoid being a distraction for the district. The allegations were first made public at the beginning of April in a Facebook post by the group Black Lives Matter 5280. The group claims several women told them about improper behavior by Anderson. This week, another third party made additional allegations during testimony at the state legislature.” – Steve Staeger, 9NEWS, Denver Colorado 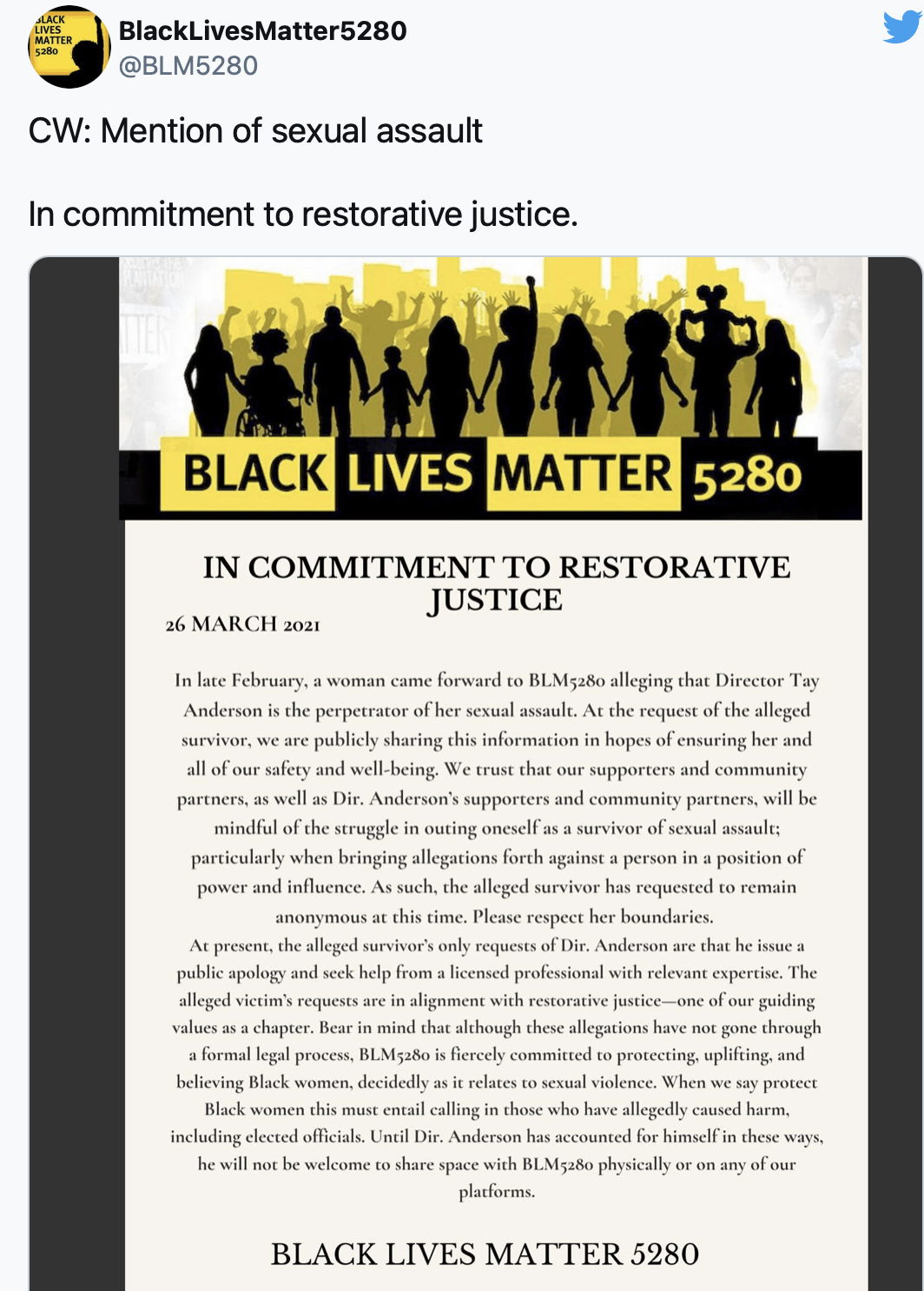 “Those who came to my home didn’t have health insurance, couldn’t afford emergency rooms, and even if they could, they wanted to avoid mandatory reporters for fear that such an interaction could jeopardize their family. It is horrifying to realize that someone had preyed on these children, knowing their silence was guaranteed.” – Brooks Fleming 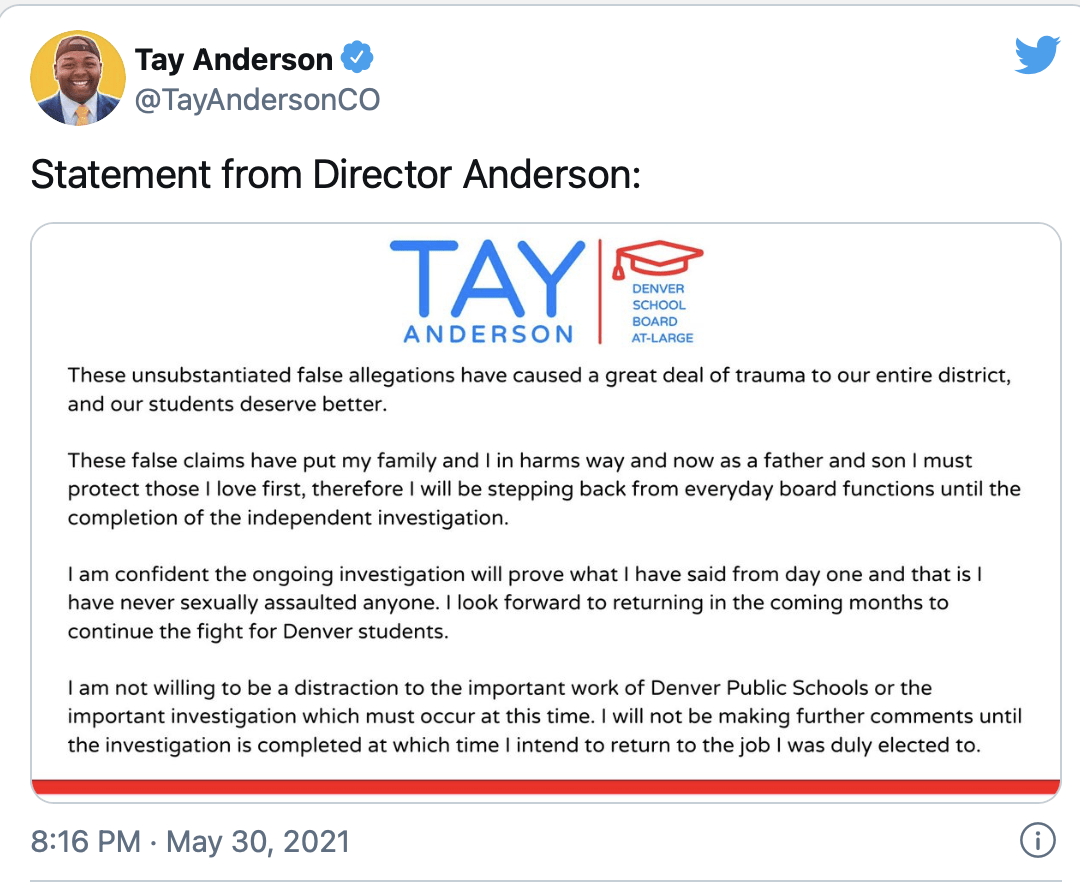 MORE NEWS: EP 104 | Big Tech is at War with Free Speech Rights and the Free Market.

These recent allegations are not nearly the first time the alleged child rapist Tay Anderson has made controversial waves in the Denver community. In March…

When folks make comments like “Black Lives Matter is a marxist and terrorist organization.”

Simply turn on your camera so they can say it to your face. Denver Public Schools is a school district that believes that Black Lives Matter, now I will be cementing this in policy! pic.twitter.com/3x2hNgGQdM

Anderson also pushes for gender neutral bathrooms which the Denver School Board mandated, after they passed a resolution in January. From his own website… 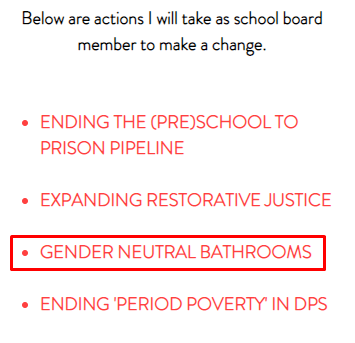 “The district will work to support adults important to the child on greater acceptance. However, the district will not wait for such adult acceptance or require parents’ or guardians’ consent before honoring the student’s self-reported gender identity and gender expression.” – Excerpt from the resolution

This past December, Tay remained seated during the Pledge of Allegiance because he fell for the propaganda and false narratives the police are racist killers

“As a Black man, I am reminded today and every day of the injustices that still exist in our society. I am remaining seated as a representative for those who were not afforded the right to be here today. I have decided not to stand because we need our leaders to have the courage to fight alongside communities in sending a clear message that we will not stand while white supremacy is thriving. We will not stand while our country separates families and keeps kids in cages. We will not stand while Black and Brown people are being murdered by those who are supposed to ‘protect and serve’ our communities.” – Tay Anderson

MORE NEWS: [VIDEO] What We Should Do With Politicians Who Won’t Fight Big Tech

So to review, Tay Anderson supports the Marxist Black Lives Matter organization and wants it in cemented in public school policy. He pushes for gender neutral bathrooms. He falsely believes the police are racist white supremacists. He will disrespect the American flag, Pledge of Allegiance, the American soldiers who have fought and died for the greatest country on the planet over it. Was concerned about ‘kids in cages’ under Donald Trump but seems to be all good with it under Joe Biden. And last but certainly not least, he’s been accused of being a SEXUAL PREDATOR by MORE THAN SIXTY DREAMERS.

This piece was written by Zach Heilman on June 2, 2021. It originally appeared in RedVoiceMedia.com and is used by permission.

[VIDEO] The “Rage” is Back: Biden Absolutely Loses it On CNN Female Reporter…

EP 104 | Big Tech is at War with Free Speech Rights and the Free Market.