The Biden Regime is an absolute hot mess...

As Americans all over the country enjoyed a Sunday full of NFL highlights like the Saints deciding to brawl with Tom Brady, a 60 Minutes interview aired with Joe Biden. Interviewed by Scott Pelley, the pair walked through the Detroit Auto Show for the first time in three years. Since the spread of COVID-19, the auto show and many other events seemed to disappear with the lockdowns and mandates. But while walking through the cars, Biden made a declaration that caught both the media and the White House by surprise. He stated that the pandemic was over. And if that didn’t cause a mountain of questions from the press, the Democratic continued dropping insider knowledge by claiming U.S. troops would defend Taiwan if China were to invade. 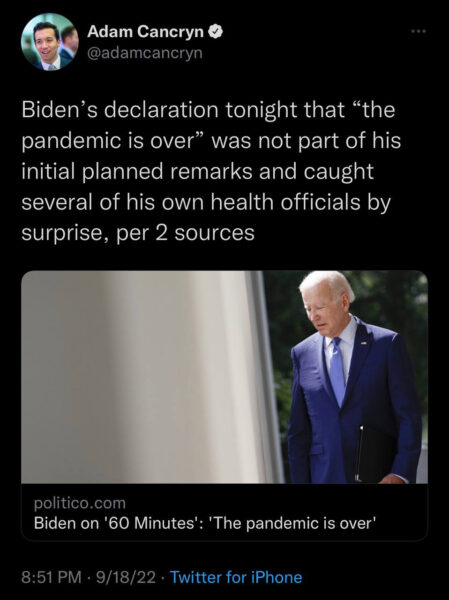 Again, Sunday might be reserved for football and the NFL, but the main story from Sunday was Joe Biden speaking with Scott Pelly on CBS 60 Minutes. In the video below, Biden gave an update on COVID-19, which led to over 1 million deaths in the United States, admitting, “The pandemic is over. We still have a problem with Covid. We’re still doing a lot of work on it … but the pandemic is over. If you notice, no one’s wearing masks. Everybody seems to be in pretty good shape. And so I think it’s changing.”

It should be noted that on Wednesday, a few days before Biden’s statement, WHO Director-General Tedros Adhanom Ghebreyesus suggested the end was close, but they were not there yet. “We are not there yet, but the end is in sight.” 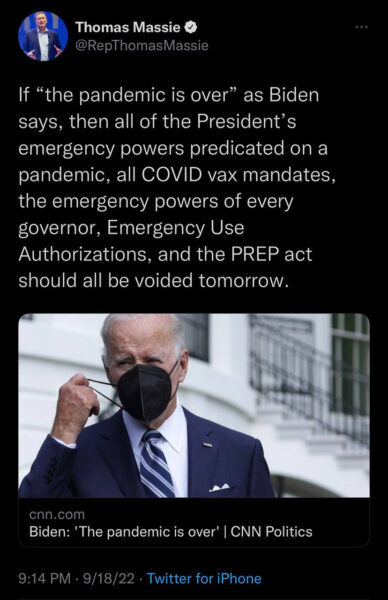 With White House staffers already preparing for the next press conference, Joe Biden continued to shock viewers when he detailed America’s stance on Taiwan and the growing tensions with China. When Pelly asked if U.S. forces would defend Taiwan if invaded, Biden admitted, “Yes, if, in fact, there was an unprecedented attack.” Even asking Biden again, the Democrat insisted, “Yes” on American troops being deployed to fight China if war breaks out.

Back in July, Joe Biden participated in a phone conversation with the President of China, Xi Jinping. The President promised to expand Beijing’s control by taking over Taiwan. He added that he was not afraid to use force if necessary. As for Taiwan, they are strictly against China’s sovereignty claims. Xi warned Biden, stating, “those who play with fire will perish by it.” 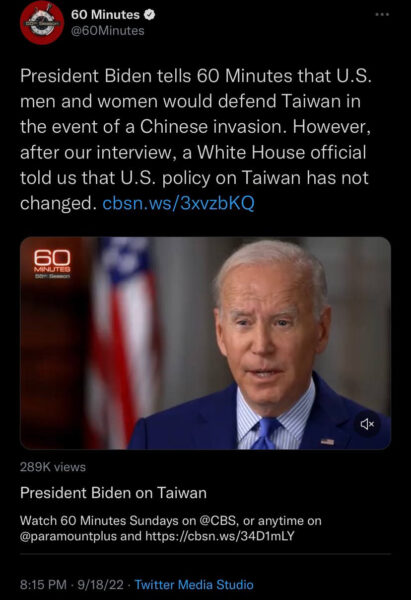 After the interview, White House officials appeared to do damage control, noting that the Democrat had not made any changes to U.S. policy when it came to Taiwan. Still, knowing the words carry a heavy price, Bonnie Glaser, an Asia expert for the German Marshall Fund, explained, “If President Biden plans to defend Taiwan, then he should make sure the U.S. military has the capability to do so. Rhetorical support that isn’t backed up by real capabilities is unlikely to strengthen deterrence.”

This piece was written by Jeremy Porter on September 19, 2022. It originally appeared in LifeZette and is used by permission.

From pop culture to faith, parenting to politics, LifeZette delivers a compelling mixture of stories, commentary, video and graphics designed to inform and entertain — and to help all of us live our lives to the fullest.